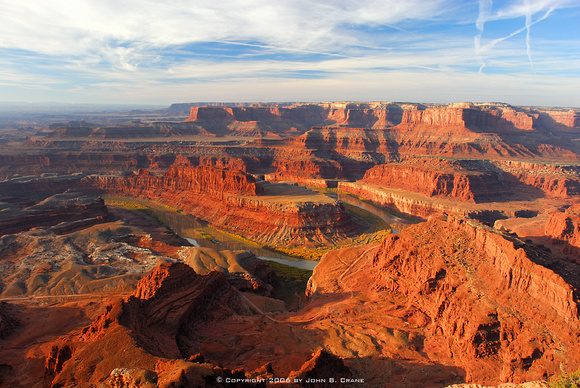 Looking down on the Colorado from Dead Horse Point, near Moab, Utah.

The unique promontory provided a natural corral into which the horses were driven by cowboys. The only escape was through a narrow, 30-yard neck of land controlled by fencing. Mustangs were then roped and broken, with the better ones being kept for personal use or sold to eastern markets. Unwanted culls of "broomtails" were left behind to find their way off the Point.

According to one legend, a band of broomtails was left corralled on the Point. The gate was supposedly left open so the horses could return to the open range. For some unknown reason, the mustangs remained on the Point. There they died of thirst within sight of the Colorado River, 2,000 feet below.
© John Crane Photography
Powered by ZENFOLIO User Agreement
Cancel
Continue