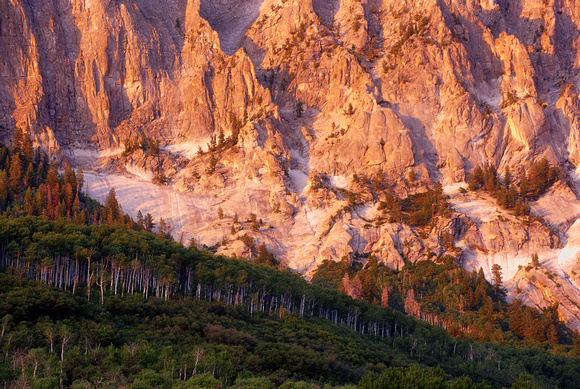 There are those who dispute whether mirror-up shooting is really necessary. I believe it is. To those who are asking what mirror-up shooting is, it's a function of the camera allowing, in essence, a two-stage shutter release. When you make an exposure with a single-lens reflex camera the mirror needs to be moved out of the way before the shutter engages to allow the prescribed amount of light onto the film. This causes what's sometimes referred to as mirror slap; slight vibrations of the camera caused by the motion of the mirror moving.

The F6 has an extremely sophisticated mirror box design employing dampening and padding to render mirror slap nearly negligible. None the less, when you're interested in no excuses shooting and after the very best of the very best, shooting mirror-up is a "best practice."

Mirror-up shooting first flips the mirror up and out of the way. After which the camera is allowed to "settle down" for a few seconds (3-10). The second step of the exposure is then made by using a device such as the Nikon MC-30 cable release or the Nikon ML-3 remote release to trigger the shutter without touching the camera - which would introduce shake all over again. The blades of the F6's kevlar shutter are virtually motionless as they glide into formation to reveal the film behind, then close without any camera shake what so ever.

Under normal shooting conditions these events happen so fast it appears as one step. Past certain faster shutter speeds it's probably not necessary to use mirror-up because any camera shake induced by mirror slap would go unnoticed in the extremely short duration. There is a range of shutter speeds, however, which mirror-slap is a very real phenomena introducing a less sharp image. This image lives in that "dead zone" - around 1/8 of a second - typically where mirror-up shooting is most necessary. The shutter is moving slow enough where any camera shake will certainly be visible.

Conversely, if an exposure lasts 10 seconds, any effects of mirror slap would be rendered unnoticeable because it would be such a relatively minor period of time - with such a long period of time afterwards to normalize the frame post-mirror slap – that you'd never see it.

The top-tier cameras like the F6 have the Mirror-Up feature. On the F6 it's located on the the Frame Advance Dial, beneath the Film Rewind Knob.

As a side note, one of the unique drawbacks to the this configuration as opposed to the Nikon F5 is that the F5 had a separate lever to the right of the lens-mount (as you're holding the camera) allowing you to lock the mirror up separately and still use the Self-Timer feature located on the afforementioned dial. On the F6, both operations are not possible in one frame because they're both located on the same dial. One needs to either shoot Mirror-up, or continue rotating the Frame Advance Dial around to the Self Timer. A minor inconvenience easily circumnavigated with the MC-30 remote cable release.
© Copyright 2012 by John B. Crane. All rights reserved.
Powered by ZENFOLIO User Agreement
Cancel
Continue